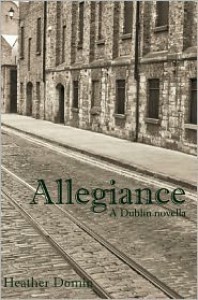 Can someone die of cuteness?

Because I think I did!

I love the 20s. I’ve never read a book set in Ireland in that period of time, so it was brand new for me. I could feel myself absorbed by the setting, the streets, the people, the smells, the flavor of the great beer and the awful whisky, the fashion, the music, the way of thinking of the people living in Dublin… In fact, the SPIRIT of Ireland! (From my modest opinion, I try to run away from stereotypes :P ).

William Young is the main character in this story. He’s a Scot whose aim is to be a policeman, with the intention of maintain the order and control in his city, maintain the peace and avoid the people to suffer what he had to live during his teens. He has seen the worst and he only wants to move forward and make a little difference in Glasgow, to make it a better place, a place where people live happy and without fear.

But for achieve that, he has to follow rules first, so Lord Christopher from the Secret Service Bureau (future MI5, oh my, James Bond-Daniel Craig! Although I've always been Roger Moore's team or Pierce Brosnan's) commands him to gain the trust from the Irish lines and get information about strange acts that could accomplish terrorist attacks or a coup against the Treaty just signed. The quest is not something he is looking forward to, but in order to reach his own ends he has to act with those means. He’s not a supporter of the Treaty but he isn’t against the Englishmen either, he's just against the violence.

So, in order to accomplish he mission, he arrives to a tavern where the “head” of some disloyal portion of the population lives, and lucky for him he is hired and soon he settles in the amateur group of Irish supporters. He is supposed to maintain a distance from them and not get emotionally involved, but when he notices, it’s too late. In part due to the people surrounding him, in part because of Adam.

Adam Elliot is a scoundrel young man with amounts of the leader Cs: “charisma, cockiness and charm”. He is famous for his numerous conquests and his wits, and he is suspected of being very involved in the cause. He's irresistible and is shameless for his dubious actions.

William feels quickly fascinated with Adam because of his confident and wicked façade. Soon they’re friends and with the following weeks, they become something more.

And they felt so natural together! The tale is told quietly, without great surprises or irregularities. It’s smooth and with soft landings, in a sweet and simple way. This deceiving simplicity turns into feelings and declarations with no weird sensations. When they give in to each other you can’t be shocked because it’s meant to be like that. They are not sappy but they are not insipid, either. It’s true the sex scenes are not that impressive or explicitly written, but I didn’t miss them at all.

You believe the transition between the mischievous guy Adam is and the lovable man with whom William falls in love. I adore slow burns and their story is one of those, with no rush but with no pause. Just… gradually being mended together, until you think being joined in one is something to be expected and the opposite are lies. So, you see, I couldn’t take my eyes off of this book for long. I only wanted the breadcrumbs they left me or to watch them through a hole in the wall, because they are SO cute together I just wanted more from them!

But their little heaven is threatened to be broken in pieces with the different conflicts to come: opposite allegiances, the secret role of William in the dispute, the betrayal his chosen side would inevitability bring, the pain in Adam’s heart… All of that will have to be sorted out to have a future together and with the people they love in a safe position. The ending is cute as the whole book is and I only could sigh contently when I finished it.

"You broke your loyalty for me," Adam whispered.

"I found my loyalty because of you," William said. "I will never forget that."