At first had no idea where I was getting into. But as events unfolded in such a detail and focus, I got the impression I was witnessing something of utter importance, so I made a quick research and found out this episode in the Ariston Baths not only happened in real life, but it was also the first recorded raid in a gay establishment in American History, so to speak. 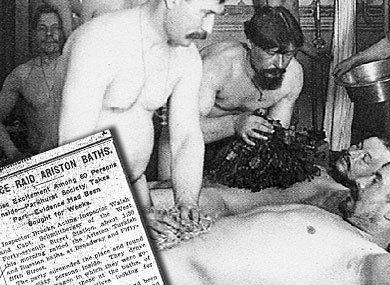 The story revolves around Theodore, a young man who has lived in a little town all his life, and has known nothing different. One day, his friend Martin visits from New York. Theodore misses Martin, for whom he feel more than friendship, but is afraid of making the move and leaving all he was ever known behind. But after some problems in the shop he works in, he sees it as the perfect oportunity to make the big step and move to the big city.

New York opens the door to countless experiences he had never imagined he would ever have the chance to live. Life in a cosmopolitan place is nothing as he had ever thought it would be. Nobody greets you or stops to help you if you ever need it. It’s expensive, it’s demanding, it’s challenging, it’s frightening and it’s exciting, all at the same time.

And Martin loves having affairs at every chance he gets. A fact that hurts Theodore, as he had always believed they would end up together.

One night Theodore takes him to the Ariston Baths, some Turkish and Russian baths where “inverted men like them” liked to spend the time and interact in sexual ways, in public display of attention for everyone to see if you chose to.

But something happens and nothing will all ever be the same. For Theodore, for Martin, for all homosexual men in the country.

This book was nothing I expected, but that is not necessarily a bad thing. For starters, the other MC appears exactly at 75%. I thought it was appropiate to give fair warning but I don’t want to dishearten you, because this book is really worth to be read. It’s surprisingly easy to read, a real page-turner, in fact. I have to congratulate the author for catching my attention since the very beginning of the story and, despite the absence of love story for most of the book, maintaining it until the very end.

And that last 25% is very charming, to be honest. I really loved Jasper and would have liked to see more of them together. But what we glimpse of them is beautiful and solid. The development is love at first sight but with a slow burn due to Theodore’s understandable caution in not to be caught after the disastrous experience in the Ariston Baths.

I love historical love stories when they are well done. This one is really well done. It took me no effort to immerse in the beginning of the 20th century. The setting was very well achieved. The MCs have to hide their relationship from the world and the way to do so is bittersweet but also the best resolution considering the circumstances. They get to live under the same roof, together, which is more than many gay people in this era could ask for.

The homophobia is fearsome, and if the Ariston Baths incident is not enough, we also have the consequences of this event taking a toll on the characters, it being directly or not. Sometimes I could feel all the frustration and the fear and the impotence due to the unfair situations that take place. It was despairing but the adorable romance and the lovely characters in the town and that end added a sweet note of color in a book that mostly would be considered a tragedy.

I got the impression this was written as a tribute to all the victims of bigotry and homophobia during those years, and the years before, and the years after. I liked how it’s done in such a simple and elegant way. It can’t be considered the typical love story because it doesn’t fit the schemes. However, I must say the romance was cute and satisfying. So, no complaint from that department.

Second part of the review:

It goes without saying the author made a great research. As you can see at the end of the book, where he writes all the bibliography. I appreciate it when authors do that.

But then I ran into this:

“The man. The sex. What did you think of the guy?

“He was… very muscular,” Theodore answered.

“And you left before you got to see his biggestmuscle.”

“I was thanking the good Lord for blessing him so amply and teaching that man how to use thatmuscle.”

Theodore blushed some more, but finally simply had to ask, “So what… what are we… talking about?”

“In the muscle department?” Martin asked, knowing that was exactly what Theodore meant.

Did you actually say it three times?

I don’t consider myself a clever person or anything, but I’m very observant. I have eyes. And you know what have I observed during my years in the gym? That, shockingly, no man seems interested in hypertrophying that muscle. Believe me, I would have noticed if that was the case. So far, no such luck. Fortunately. Or not.

I’m afraid for breaking bad news, but I think this is the perfect timing to inform you the penis is not a muscle. Yes, I know this may come as a surprise to you, seeing that you have had it between your legs your whole life and I have none of the sort. But I must tell you something important about your basic anatomy, because you need assistance in this.

The penis is formed by three erectile bodies: two corpora cavernosum and one corpus spongiosum. 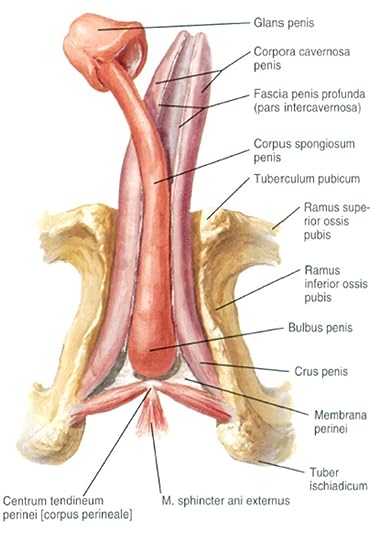 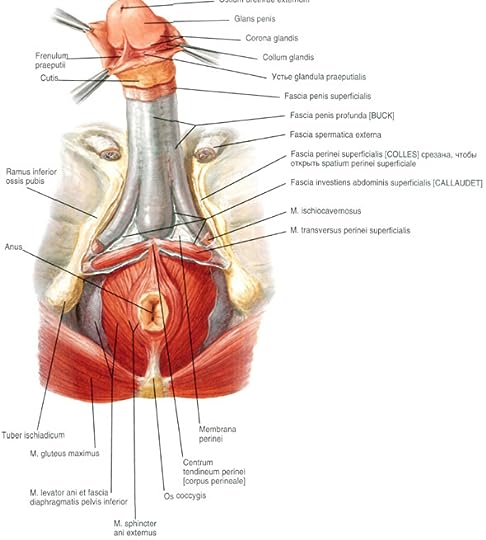 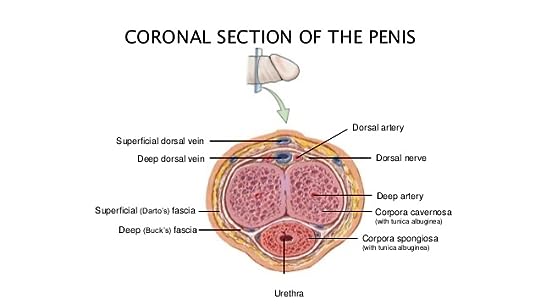 See? No muscle. Unless you count the Dartos fascia, which is a tissue that covers the genitalia and has some muscle fibers, which contract the scrotum in order to protect the testicles against the cold. It also works in conjunction with the cremasteric muscle, which is the one that contracts involuntarily in an action called the “cremasteric reflex” in order to protect the testicles from a trauma. It means, when you are in fight or flight response, your maleness “react”. You can reproduce the reflex by stroking the superior and inner part of the thigh or the lowest part of the pelvis. In fact, this reflex is important in the physical exploration in certain pathologies to evaluate if there is an actual damage to the organ or to the nerves at that level.

But apart from that, no muscle to be seen. And much less a muscle you can “control” as easily as, let’s say, the biceps.

I don’t know about you, but it would creep me out if it could. There are some pics on Google and I’m scared. I do not recommend it, but if it tickles your fancy...

Anyway, you can shout, kick, cry, moan about your wounded pride… but it’s not a muscle.

How does this organ work? When a man is aroused, the corpora cavernosum are filled with blood and that’s what makes it lengthen and thicken. Meaning: it gets hard. The reverse process, the return of said blood to the main system, is by far less efficient. That’s why it’s so easy to have an erection but very hard to make it disappear, it takes a while driving all the blood stored in the corpus cavernosum out of the organ.

Another curious fact. Have you ever wondered the human glans is mushroom-shaped? One theory says it’s because it works as a suction cup. It would theorically suction the semen the previous man had left in the vagina. It’s sort of a means of survival: the consecution of your lineage is at risk, so this would make sure you “erase” the genetic material other males have left, and you put your own in their place.

Isn’t it amazing? Funny how everything has an explanation and nothing is left to chance.

Except the wisdom teeth. And the appendix. And the ear muscles. And… well, I should shut up for once.

Whatever, to sum it up:

If cocks were a muscle, gyms would look totally different.

You are most welcome.