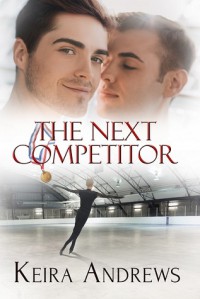 A sport I’ve always loved and, as I’m such a hopeless case, I’ve never followed closely. Skating has always been a sport from ‘other’ countries: Russia, Japan, Canada, Scandinavian area (AKA: places where it’s fricking cold!). Meaning of this: it rarely appears on TV where I live. But lately it’s becoming closer and closer. Still, no response from my part. Wow.

I liked it a lot, because it’s a good book. However, there were parts that reminded me of Reading the Signs (a Canadian vs an American, Italian family, sports…). Not enough to say it’s a copy, but enough to say it wasn’t as original as I would have liked it to be.

This is supposed to be a YA-kind of book. At least, that’s the original idea, the original premise. It doesn’t feel that way, maybe NA, but that’s it. I’m not speaking about the chemistry or the sex scenes alone, but about everything surrounding the main pair. It feels mature, but they are young, so of course there are misunderstandings and a phase of self-discovering.

It’s true that at first the situation is hard to defend at first.

Alex is harsh and egocentric, only saying hurtful comments to everybody. I had a hard time believing he’s so mean but at the same time, he has lots of awesome friends and good people around him at all times.

Alex is super competitive, up to the point where he can only focus on winning, skating is the ‘need to win’ rather than the ‘need to skate’. I can understand athletes have an obsession, they spent most of their lives in their discipline, and not winning can be disheartening.

But… if you think about it, athletes lose a competition more often than winning it. So it’s only fair they develop a ‘second skin’ to bear the weigh and the pressure and still be able to enjoy what they are doing.

Alex focus so much on winning he loses himself in the process.

Matt is more balanced, he lives with his feet on the ground. He’s by far more experienced, but he still lives in the closet. However, that doesn’t mean he doesn’t have to deal with challenges of his own. And something happens that puts his career and his self-esteem, in jeopardy.

Their relationship follows a natural path. Nothing comes out of the blue and strikes as something ‘strange’. It’s fun because at first Alex does not like Matt. Not at all. But hey, he’s not so bad now, yeah? But hey, he’s good, right? But hey, I wanna have sex with him right now!

Yes, it’s a comfort story, not much angst, lots of fluffy scenes, a couple of hot ones, and a moral that should sound pretentious, but it’s positive and uplifting instead.

I do recommend it.

***ARC received from author via Indigo Marketing And Design in exchange for an honest review.***